Revival Brewing Company, one of Rhode Island’s premier craft breweries, announced a unique partnership with ConserFest to help raise funds and awareness about land conservation. The Providence based brewer is releasing a new beer called Night Swim’ah in which a portion of the proceeds will benefit conservation efforts.

Founded in 2010, Revival is best known for making beers the way they should be made, bold, furious, and full of passion. Revival brewed Night Swim’ah to compliment ConserFest as the perfect light and drinkable beer to enjoy this summer on Block Island, RI. It’s a Belgian style Witt beer weighing in at 4.7% ABV and is flavored with orange peel, coriander, and raspberries. Distribution will be available in Block Island, Rhode Island, Massachusetts, and Connecticut on draft and in six packs for $9.99. Revival is also supporting the beer’s launch with a social media contest and limited edition merchandise available from their online shop.

Each year, ConserFest continues their efforts to promote environmental stewardship by bringing together the masses in a series of music celebration events to help protect beautiful places such as Block Island, RI. They describe themselves as “Music on a Mission,” with the ultimate goal to educate about the environment and provide the right conscious tools so that participating audiences can become agents of change and embody the ConserFest core mantra, “Embrace Your Place.”

Revival’s Brewmaster, Sean Larkin, first fell in love with Block Island while working at Captain Nick’s, The Atlantic Inn, and Smugglers Cove while he was in culinary school. Whether it’s surfing at one of the island’s surf spots or mountain biking through Rodman’s Hollow, Larkin is passionate about the hidden spaces that Block Island has to offer. Night Swim’ah is Larkin’s way of supporting local environmental conservation efforts.

SCLT has entered a contest to win a $15,000 Gardens for Good grant from Nature’s Path but we need your help. The first step in winning the contest is to get more votes than the other gardens who have entered. To do this we need you to vote for SCLT every day until July 6th!

It takes a few seconds to vote and you can vote once every twenty-four hours*. If you’d like to sign up for a daily reminder to vote, click the button at the bottom of the page OR reply to andrew@southsideclt.org with whether you use Google Calendar and the time of day you’d like your reminder. You will need to vote the same time each day so that you are sure the 24 hour time limit has passed.

Our goal is 175 daily voters – with your help we can win this grant! (Without you we won’t.)

Nature’s Path will decide winners based on the number of votes and the strength of the organization’s application. If selected, SCLT will use grant funds for our up-and-coming Somerset Hayward Garden, which will be home to two urban farmers and a new Youth Enterprise Farm.

Please note: It may be easier to vote on a computer. Voting on a smart phone is possible but a little more difficult. If you want to vote on your phone you can but it may take a little longer.

These links also have more info about the Somerset Hayward Garden Project!

*Each email address can vote once a day. For two people to vote from the same computer in one day, use a different browser the second time.

Thank you for your support! We couldn’t do this work without you!

The American Cheese Society (ACS) has announced that it will bring its annual Conference & Competition to New England for the first time in nearly a decade. With the theme of “ACS Cheese Camp 2015: Craft, Creativity, Community,” the 32nd Annual ACS Conference & Competition takes place July 29 – August 1, 2015, at the Rhode Island Convention Center and at various locations around Providence. Early bird registration is now open, and more than 1,000 cheese industry members are expected to attend – including cheesemakers, retailers, distributors, importers, specialty food producers, and even enthusiasts who simply appreciate great cheese.

As a well-known foodie haven of the East Coast, Providence, R.I., is the ideal locale for “ACS Cheese Camp,” which is centered around three cornerstones of the American cheese industry: craft, creativity, and community. This theme reflects the excitement and growth of the artisan and specialty cheese industry throughout the Americas. The four-day Conference provides an opportunity for attendees to enjoy unparalleled educational, tasting, and networking opportunities with industry leaders from around the world. The Conference also hosts the 4th annual ACS Certified Cheese Professional® Exam, the only exam of its kind, which encourages improved standards of comprehensive cheese knowledge and service throughout the industry. There are currently 406 ACS Certified Cheese Professionals® throughout the United States and Canada, and more than 250 candidates will sit for the exam in Providence.

Kicking off ACS Cheese Camp on Thursday, July 30, is an interactive opening session facilitated by fourth generation restaurateur Mark Canlis, as well as an Opening Reception hosted by Marquee Sponsor the Vermont Cheese Council. The Conference also offers the opportunity to hear the latest regulatory news from Dr. Susan T. Mayne, the new Director of FDA’s Center for Food Safety and Applied Nutrition, as well as attend the popular “Meet the Cheesemaker” event, where attendees can learn about and taste cheeses directly from producers. Unique educational and tasting sessions are offered throughout the Conference, such as “Pairing Principles of Cheese & Wine,” “Delicious Molds & Mushrooms,” and “Quattro Portoni: Water Bufala in Northern Italy, a Transition that Worked.” There will also be opportunities to take regional tours, and to meet with Scholars-in-Residence and a Business Strategist-in-Residence for one-on-one cheesemaking and business consultations.

The prestigious ACS Judging & Competition recognizes cheeses of the highest quality for their aesthetic and technical merits. Entries are judged blindly by 38 internationally renowned judges, experts in the field. After two intense days of judging, the first-place winners in each category will be evaluated together, and a “Best of Show” will be chosen. The winners will be revealed at the annual ACS Awards Ceremony on Friday, July 31. On Saturday, August 1, the “Festival of Cheese” will allow Conference attendees and members of the public to sample over 1,600 competition cheeses and specialty foods.

In 2006, Ost earned his bachelor of science degree in hotel management from Johnson and Wales University. He began working in the food industry as a young teenager, bussing tables at his father’s restaurant, Sandrine’s Bistro in Cambridge, Mass., working his way up through kitchen to management. Prior to joining Encore Hospitality Group, he was employed by the Eurest Services division of Compass Group, a global leader in food and facilities support services in over 50 countries worldwide.

“With last year’s addition of a private dining room in Providence, and the successful opening of a second location in East Greenwich, we’re serving over 4,000 people per week. Our team is working hard every day to prepare and serve great food with attentive service at an affordable price. With his impressive hospitality heritage and management background, Stephane is committed to and capable of delivering the best possible experience to our dining guests,” states Paul Conforti, managing partner of Encore Hospitality Group. “He is taking a key leadership role in our restaurant business, and we’re pleased to have him on the Encore team.” 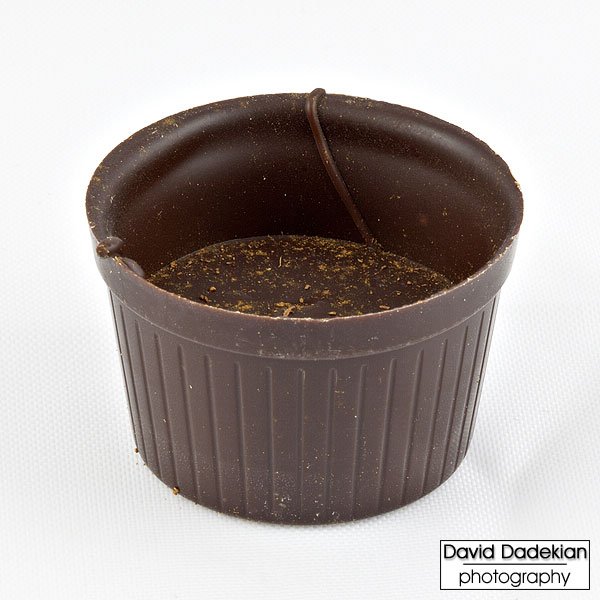 Local honey maker Jeff Mello, owner of Aquidneck Honey, has branched into chocolate making, now offering several different chocolate treats all filled with his flavorful honey. Starting with a base of Belgian chocolate, Mello makes both dark and milk chocolates with and without nuts, and soon will be adding caramel and coconut chocolates. The nuts used are all-natural walnuts, pecans and cashews. Natural sea salt and cinnamon are sprinkled of top of each cup and all variations are wheat and gluten free.

I had a chance to buy some of the dark chocolates, both nut and nut-free flavors, before they quickly sold out one Saturday morning at the Pawtucket / Wintertime Farmers Market. Both were very well made structurally and were clearly made with good chocolate. Aquidneck Honey is sweet, but not so much so that it made the overall candy cloying. I was concerned the chocolate with three different kinds of nuts in it would be too nutty, overpowering the honey, but my concerns were unfounded. I liked both kinds very much, with a slight preference for the chocolate with nuts, though neither kind lasted very long. You can buy the chocolates in bags of six from Mello at the market on Saturdays from 10 am – 1 pm. Aquidneck Honey. 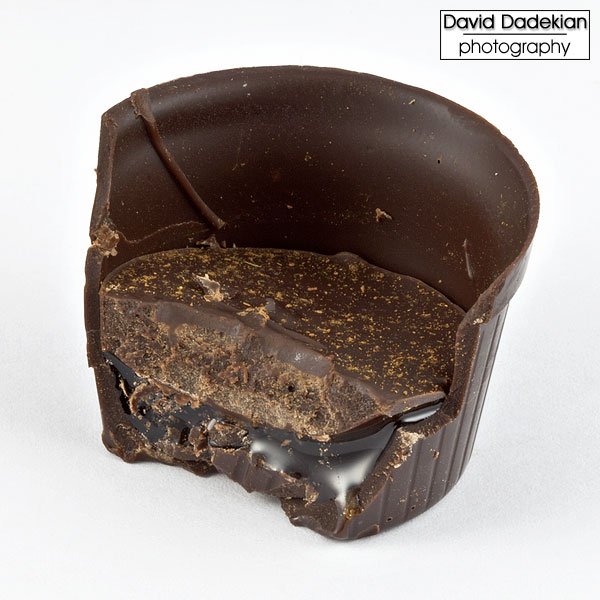