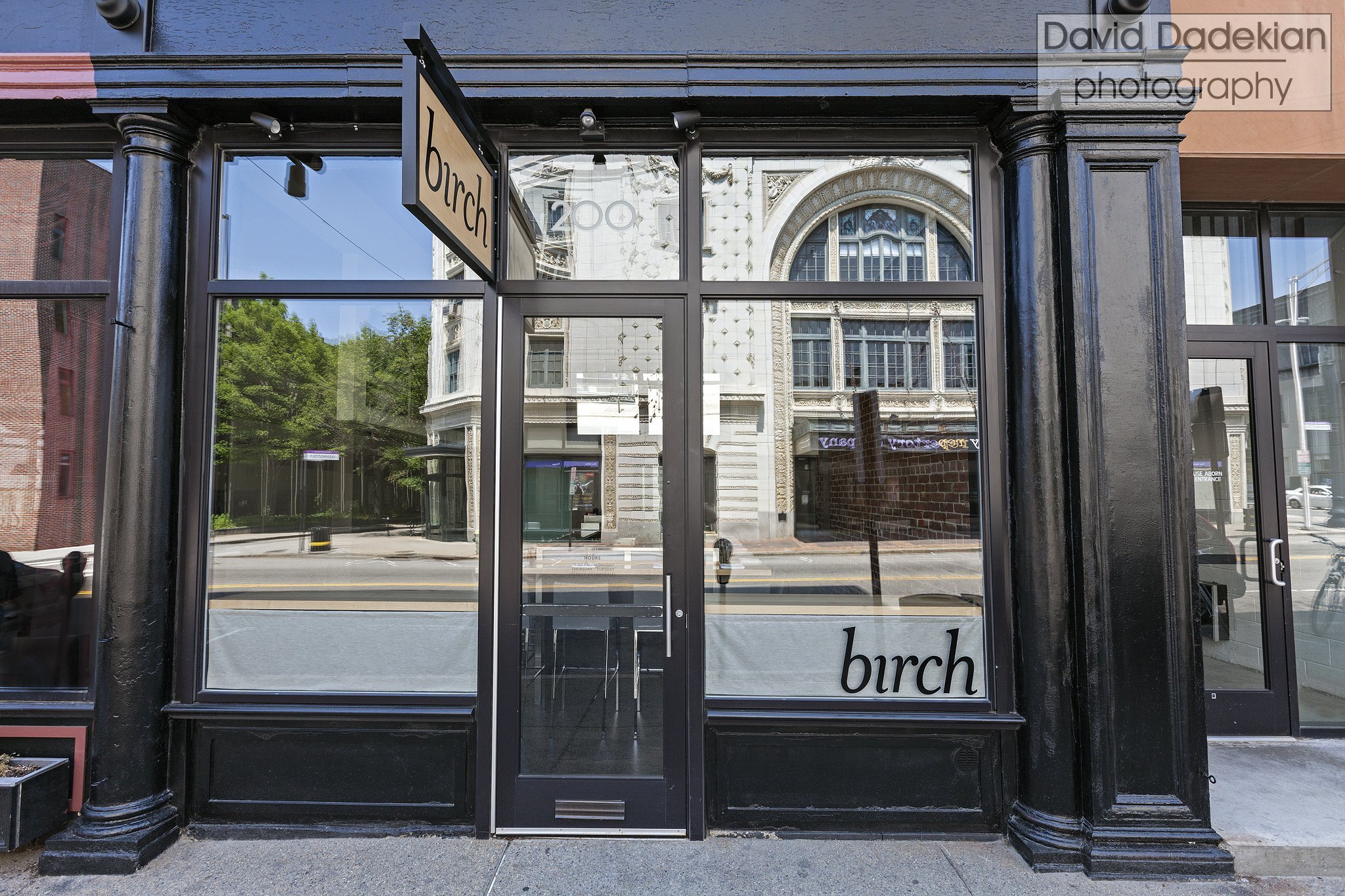 The past year has brought some great changes into Providence, including some of our best restaurants yet. Among these are new favorites such as north and The Grange. Luckily for us, the list doesn’t end there. Recently, two well-seasoned hospitality professionals, Heidi and Benjamin Sukle, have taken the initiative to fill the space formerly occupied by Tini (200 Washington Street) and open the newest addition to Providence’s upscale dining scene: birch.

Birch is a New England inspired restaurant, focusing on the beauty and natural bounty that comes from the region’s seasonal agriculture. With a menu based around the absolute freshest ingredients, carefully sourced from the very best farmers throughout the region, birch is raising the bar on what it means to eat local.

Upon walking into birch, we were greeted by Heidi Sukle, the co-owner and general manager, who had two seats waiting for our reservation. With only 20 seats to work with, efficiently booking reservations to maximize turn-over while keeping no customer waiting is a difficult feat, but Heidi seemed to have the perfect formula as every seat was filled within 10 minutes of the previous diners leaving.

The look and feel of the dining room is elegant and chic, with one exposed brick wall, and a painted wall which had beautiful pictures of the Rhode Island coast, taken by Chef Benjamin Sukle. They certainly did a good job of making the space their own, changing the décor from Tini’s silver-and-black to wood and soft lighting, which give the room a warm, gentle glow after the sun goes down.

The seating at birch is bar-only, which sounds strange for a high-end restaurant, but birch—with it’s list of well-thought-out and unique cocktails—is more of a half-bar-half-restaurant, and once you’re settled in, the bar seating is actually quite enjoyable. There is always a server right there when you need anything, and the seats are just far enough apart to allow for a somewhat intimate dining experience if you’re coming with a party of two. Due in part to the tiny room and limited seating, but mostly to the experience and skills of the waitstaff, the service throughout our time at birch was wonderful. The staff really knows the food, and can tell you what’s in almost every dish.

We made two visits to birch; one on the second day they were open, and one the next week. While the service was very nice on our first visit, there were, inevitably, some aspects that needed to be fine-tuned. On our second trip to birch, however, it was clear that throughout the opening weekend, the staff had pinpointed every tiny kink in the service experience and taken measures to perfect their techniques. The staff was very helpful when ordering, explaining each dish we asked about, and even offering suggestions based on their favorites and the kitchen staff’s favorites.

The kitchen at birch is headed by nationally acclaimed chef and Johnson & Wales University graduate Benjamin Sukle. Benjamin has been the chef at Providence’s The Dorrance and became well known for his beautiful, creative plating and fresh, seasonally inspired cooking style. The seasonings and cooking techniques that are used in this kitchen are completely and utterly unobtrusive to the natural flavors of each ingredient. Ben has spent a long time carefully sourcing these ingredients and treats them gently, making sure that the work put into sourcing them does not go unnoticed.

Among all of the food we ordered at birch, the first plate to come was the pierogies. They were served over a bed of summer onions, garnished with house-made potato chips and mustard flowers, and accompanied by a quenelle of a spicy mustard sauce. When it comes to me and the food at birch it was love at first sight, and in-love at first bite. The filling in the pierogies was velvety and smooth, which was a perfect contrast to the grainy texture of the Kenyon’s Cornmeal Hushpuppies, another of the appetizers we ordered. The hushpuppies were warm and comforting, with a sweet and tangy honey ranch sauce.

My favorite appetizer—and possibly my favorite dish that I ate at birch—was the Shaved Scallop. This was sweet scallops, which tasted like they had been plucked from the sea to order, dressed in a house-made mayonnaise, topped with sliced radishes, avocado, fennel, and toasted sesame. While normally, the idea of dressing beautiful fresh scallops with mayonnaise seems heavy and overpowering, this was no Miracle Whip. The house-made mayonnaise at birch is light and smooth—almost frothy—with gentle flavors of lemon juice and melted butter. The mayonnaise had just enough flavor to bring out the sweetness of the scallops, but not enough to overpower or hide the flavors of any other component. To me, this dish is the perfect example of Benjamin Sukle’s culinary style. He did the perfect thing with each of these ingredients: absolutely nothing. Every single ingredient that went into this plate was left alone and added it’s own flavor-idiosyncrasy to the dish. This was truly simplicity at its finest.

The main courses at birch seem to all be prepared with a similar formula: a very simply prepared, remarkably fresh protein, accompanied by an extremely creative side, usually focused around one specific vegetable, and a lack of starch—or very small starch—which can make the portions a bit small, but it’s a fair trade off for the amount of elegance and simplicity that really make these dishes. The Rhode Island Berkshire Pork is a perfect example, braised and served with an assortment of raw and charred cucumbers, and sofrito (an aromatic mixture of minced vegetables). The pork braise was just right; tender yet textural. All too often, braised pork can become mushy from being left to cook for too long, but this pork had a nice balance of textures.

Another delicious main course was the Pt. Judith Fluke, which was steamed in verbena. The fluke had a mild flavor, which paired well with the floral essence of the verbena. The almond sauce which was served with the fish was creamy, nutty, and slightly earthy, which acted as a nice contrast and added more substance to the small portion. The vegetable that accompanied the fluke was one of my favorites; carrots, prepared three ways. There was a quartered carrot that was charred until one side was black and the entire carrot was cooked through. This brought out a mild butternut squash-esque flavor from the carrot, which was also surrounded with sliced carrots, and dusted with carrot powder. This powder was one of the most creative ways I’ve ever seen a carrot prepared, made from the dehydrated pulp of juiced carrots. Another excellent main course was the Block Island Striped Bass. The bass was seared, and served with wilted escarole and lovage, as well as turnips and a slightly briny sauce made from fermented turnip juice.

We finished off the night with a decadent trio of chocolate puddings (milk chocolate, dark chocolate, and caramelized white chocolate) topped with crumbled oat crisp, and a sweet-and-sour rhubarb sorbet. This creative dessert was an excellent ending to an elegant and innovative meal. The team at birch have obviously put a lot of effort into creating a unique experience, certain to please the adventurous diner in all of us. If you’re looking for something different, then this new Providence food destination is a must.

The Blogetarian’s Review: The Nitro Bar